In China where many aspects of family life remains heavily regulated, a recent wedding held for two 16-year-olds reignited the debate on early marriage.

Pictures of the baby-faced couple from Guangxi province in their wedding outfits went viral on social networks earlier this week.

It prompted surprised comments online and in the mainstream media, not least because the legal marriage age in China is 20 for women and 22 for men.

But the bride, identified by local media as Xiaowu, told local newspaper Nanguo Zaobao that they only held a celebration, and intend to register their marriage once they come of age.

“We’ve known each other for more than a year, marriage was inevitable, so we decided to have our wedding feast,” she said, adding that they had the full support of their families who paid for the dinner. 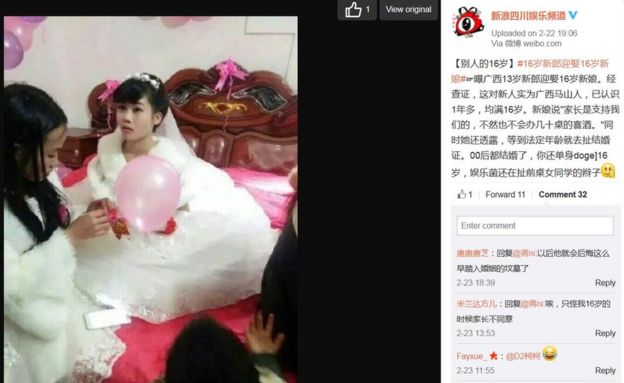 Online, the debate raged over whether they were too young to marry.

“I honestly feel that the parents of these children were a little too hasty! These are just young punks, what do they know?” said one commenter on the popular Tencent forum.

“Is it true love? Or just a game?” was the title of a commentary carried by state media outlet WorkerCN.

It wished the couple well but concluded sternly: “Love is not a game, love is a form of responsibility and duty to family and society, we hope you understand this point!”

Others have pointed out that early marriage was not unusual in ancient China, and that the practice is still widely accepted among rural communities. 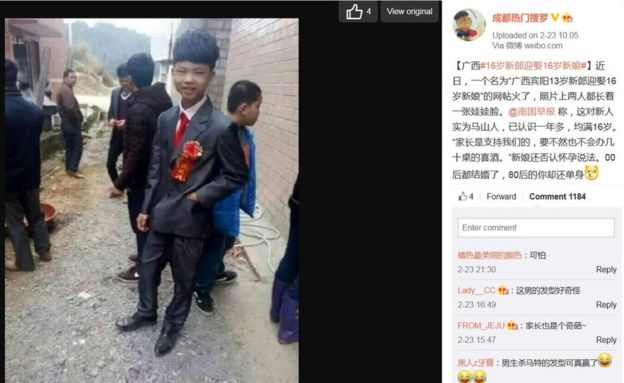 One reason is economic. For poor, rural families, getting married and having children early helps expand the family’s labour pool and income, particularly with China’s longstanding one-child policy which only recently was changed to allow for two children.

These teenage couples either stay in their villages to work as farmers, or move away to become migrant workers – being married early helps to reassure families that their children will take care of each other as they head off to big cities.

But another reason is the lack of sex education, according to New York-based Chinese photographer Muyi Xiao who has documented the trend in a recent photo essay, where several of the teen couples she met had “shotgun marriages”.

“Locals tell me they have access to cable TV, phones and the internet these days, so children can watch romantic television dramas from an early age, but they don’t have the right education,” she said. 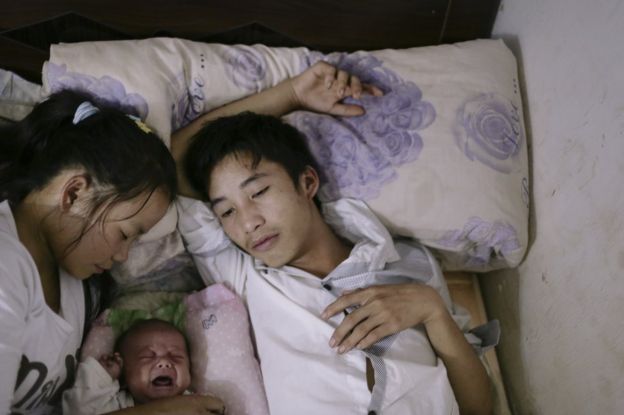 The young couples face legal complications and a difficult choice once they have children.

Their child would need a hukou – the all-important household registration document that will allow him or her to go to school, receive medical treatment, open a bank account, or buy a plane or train ticket.

But doing so will mean incurring varying levels of fines, depending on where they live, as their children would be considered illegal. It is a source of frustration for these couples who think the worst they have done is fallen in love.

“These young couples complain about the fine and say they do not deserve to be penalised – after all, they feel that getting married and having a family early is the normal thing to do,” Ms Xiao said.